Known for centuries as an idyllic escape from urban stress, the Chesapeake Bay Eastern Shore resonates with rural beauty and picture-perfect serenity. Blue crabs and gentle breezes tickle your fancy in charismatic towns where no one is in much of a hurry and only the geese are honking. The following charming towns are among our favorite getaway destinations on the shores of Maryland and Virginia.

Kent Island has something for everyone. The historic Stevensville arts district features antiques galore, unique boutiques, excellent food options and tours of the Paul Reed Smith Guitars studio. Kent Narrows, a collage of marinas, seafood restaurants and dock bars, is the liveliest piece of the island. Savor the natural beauty on the area’s extensive hiking, biking and equestrian trails. 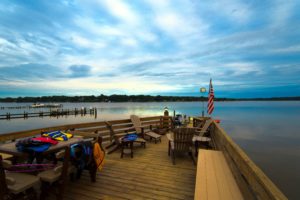 Chestertown, a graceful colonial port dating back to 1706, offers history buffs afternoon tea at the White Swan Tavern public house, a glimpse of African-American culture at GAR Sumner Hall (created in 1908 by Union Civil War veterans), and tours of Washington College (chartered in 1782 with support from America’s first president). Get costumed for the Tea Party Festival or Downrigging Weekend, both held at the newly renovated Port of Chestertown. Dine in style at The Kitchen in the Imperial Hotel or drop in to Bad Alfred’s Distilling for craft beer and wood-fired pizza.

Where To Dock: Chestertown Marina

Where To Dock: Haven Harbour Marina

Easton, sophisticated as it is lively, is the heart of the shore’s arts and cultural scene featuring a world-class theater, renowned art galleries, impeccably curated museums and spirits, both liquid and spectral. Easton Ghost Tour stops include a haunted courthouse, a jail, the Tidewater Inn and a spooky secret passage known as Magazine Alley.

Where To Dock: Easton Point Marina

St. Michaels can be quiet and peaceful or alive with visitors for its many annual events. The town 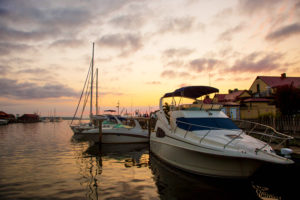 center is lined with superb boutiques and restaurants. The Chesapeake Bay Maritime Museum honors the Bay’s heritage while the Classic Motor Museum displays a rotating collection of classics from antique farm tractors to vintage autos.

Where To Dock: St. Michaels Marina or the Chesapeake Bay Maritime Museum

Oxford is a graceful scene from a vintage postcard. Stroll along tree-lined streets between picket fences to the Robert Morris, America’s oldest full-service inn, where James Michener outlined his novel, Chesapeake. Stop at the Scottish Highland Creamery for your “flavorite” ice cream cone. In season, the country’s oldest (1683) privately operated ferry, the Oxford-Bellevue, shuttles the Tred Avon River.

Where To Dock: Safe Harbor Oxford

Tilghman Island is a watermen’s village of serene landscapes and friendly folks, crowd-free except during the annual crab feasts and docking contests. Its colorful heritage and distinctive culture are 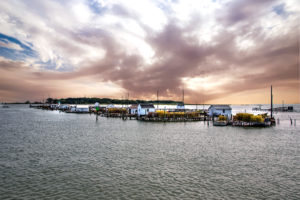 Where To Dock: Knapp’s Narrows Marina

Cambridge celebrates its rich maritime history at the Richardson Maritime Museum, the Ruark Boatworks and aboard an authentic oyster-dredging skipjack cruise. Chat with the locals at Ocean Odyssey or join crab-loving crowds at the Taste of Cambridge Crab Cook-Off Festival. The nearby 28,000-acre Blackwater Wildlife Refuge is a wintering area for Canadian geese.

Where To Dock: River Marsh Marina or Cambridge Yacht Basin

Tangier was named one of the world’s Top 20 Places to Visit by National Geographic. Fly, ferry or boat to Tangier Island for local dock-to-table seafood and stay overnight at one of the island’s guest houses. Many natives of Tangier speak a distinctive dialect whose origins, scholars speculate, is derived from 17th-century English or possibly a result of isolation off Virginia’s eastern shore.

Where To Dock: Parks Marina

Onancock has a vibrant art scene including its International Film Festival held in its retro movie
theater. The adventuresome can take a Southeast Expeditions’ guided kayak trip to the site of
an old Indian village or try the Paddle Your Glass Off tour to a local winery. The area is home to a variety of bird life and many homes are Backyard Wildlife Refuges.

Where To Dock: Onancock Wharf 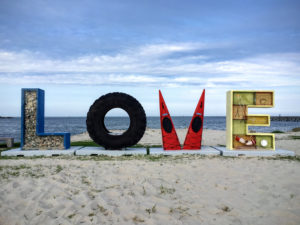