From high rollers to hayseeds, people come from all around to experience the electrifying-atmosphere of a casino. No mere gambling dens, today’s premier establishments feature an eye-dazzling array of table and video games as well as fun-filled entertainment, stylish retail offerings, world-class restaurants and lavish accommodations. Even if you don’t plan on wagering, casinos are a matchless option for a memorable overnight stay (or week long binge!) during your next cruise. So take a gamble and visit these casino locations that are easily accessible by boat.

Recognized with an AAA Four Diamond Award for hospitality — Atlantic City’s revitalized Marina District, the Golden Nugget is one of the best-known casinos in the world. Since 2011, it has seen a $150 million propertywide renovation and expansion project that added signature eateries, a retail corridor, a poker room, a spa and salon and fully remodeled rooms. The new H2O Pool + Bar is a great place to soak up some sun and recharge, while The Deck restaurant has casual fare and outdoor entertainment in season. The Chart House restaurant is located right on the water and allows diners to watch the sun set over the water, with unparalleled views of the attached 630-slip Senator Frank S. Farley State Marina, managed by Golden Nugget.

The name Uncasville might not jump off the map, but its neighbors include Mystic, Connecticut; Montauk, New York; and Newport, Rhode Island, putting it in the middle of prime New England cruising grounds. Boasting three themed casinos — Earth, Sky and Wind —Mohegan Sun tantalizes the senses with a 55-foot indoor waterfall, the world’s largest indoor planetarium dome and Wombi Rock, a glowing crystal mountain made of imported stone. There’s shopping (130,000 square feet) and dining (40 options) and a luxurious spa, but families will especially love the Kids Quest/Cyber Quest mega arcade/playground facility. The Mohegan Sun even has its own WNBA team, the Connecticut Sun. Dock at the Marina at American Wharf, just three minutes away, which offers private car service to the casino as well as special incentives and
discounts.

Scheduled to open this fall, MGM National Harbor is a visually bold, $1.3 billion resort rising from the eastern shore of the Potomac River in Maryland near George Washington’s Mt. Vernon Estate and across the river from Old Town Alexandria, Virginia. The resort is a progressive, 300-suite hotel with a luxury spa and rooftop pool; Vegas-style casino with 3,600 slots and 140 table games; high-end branded retail; fine and casual dining from both local and celebrity chefs; and a dedicated 1,200-seat theater venue. It’s all here, and so is National Harbor Marina, offering provisions delivered right to your boat from a variety of outstanding restaurants, shops and markets.

As though the turquoise waters, famed fishing and diving, white-sand beaches, and historic towns and landmarks of Bimini weren’t enough enticement to visit, Resorts World Bimini Casino beckons with 10,000 square feet of table games, 160-plus slot machines, a high-limit gaming salon and a sports book. Floor-to-ceiling windows in the casino present unmatched ocean views, and the connected indoor-outdoor restaurant sits directly on the Mega Yacht Marina. Dock there or at the on-site Fisherman’s Village Marina, home to the resort’s retail marketplace, where guests can take advantage of an array of restaurants, stores and amenities, including a fitness center, restroom and shower facilities, and The Healing Hole — an open-air sports bar serving up cold beverages, casual cuisine and live entertainment. 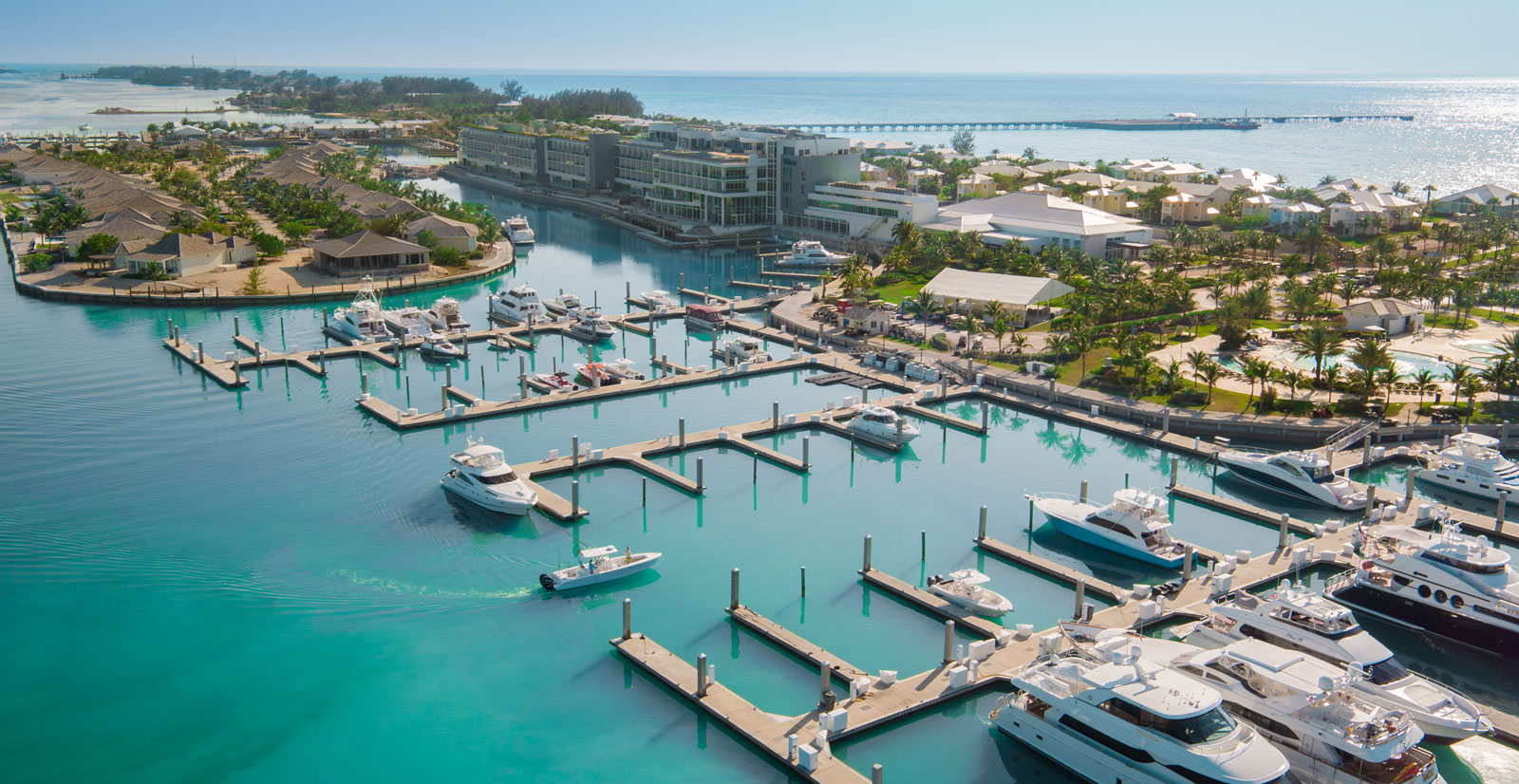 The Red Cliff Band of Lake Superior Chippewa established this wilderness-inspired attraction in part to complement and preserve a love for their land and its waters. The lodge-style resort and casino showcase spectacular views of the lake and the Apostle Islands, and in addition to its namesake marina with 45 slips, two adjacent campgrounds allow the adventure of a night spent sleeping under the stars. Legendary Waters’ gaming floor consists of 240 slots, live blackjack and poker, and — on a seasonal basis — bingo and cribbage. Wii-Kway-Ong Dining & Spirits and Minising Café are located on site. Check the event calendar for a wide spectrum of nationally recognized entertainers such as Chubby Checker, Neal McCoy and Great White.

This is rock star territory, to be sure. The AAA Four Diamond-rated resort regularly draws performers like Pitbull, Seal and ZZ Top to its on-site arena, and nine clubs and bars offer nightlife galore. Music memorabilia lines the casino walls. The Rock Spa has signature Rhythm & Motion treatments. The lagoon-style pool is right out of an MTV video — waterfalls splashing over mountain rocks, private cabanas, a 182-foot high waterslide and a Beach Club perched at the base of a palm-studded tropical isle. Restaurants
range from fine dining to snacks, including, of course, a Hard Rock Café. Dock 10 miles away at Bahia Mar Resort & Yachting Center or Hyatt Regency Pier Sixty-Six Resort & Marina in Fort Lauderdale.

The only waterfront casino in Puget Sound, Squamish Clearwater Casino Resort is nestled on the shores of the Agate Passage and highlights the rustic natural beauty of the Pacific Northwest. Since 2015, the property has added a new hotel tower with 98 rooms (all featuring beautiful water views) and a new wing with six fine dining and café-style restaurants. A remodel and expansion of the casino is due to be completed in September 2016, with an additional 15,000 square feet of meeting and entertainment space coming in 2017. There’s a boardwalk and terrace overlooking the water and a sand beach, but no on-site dockage. No worries! Poulsbo, Washington, a 10-minute drive, has you covered with Poulsbo Marina and Liberty Bay Marina. 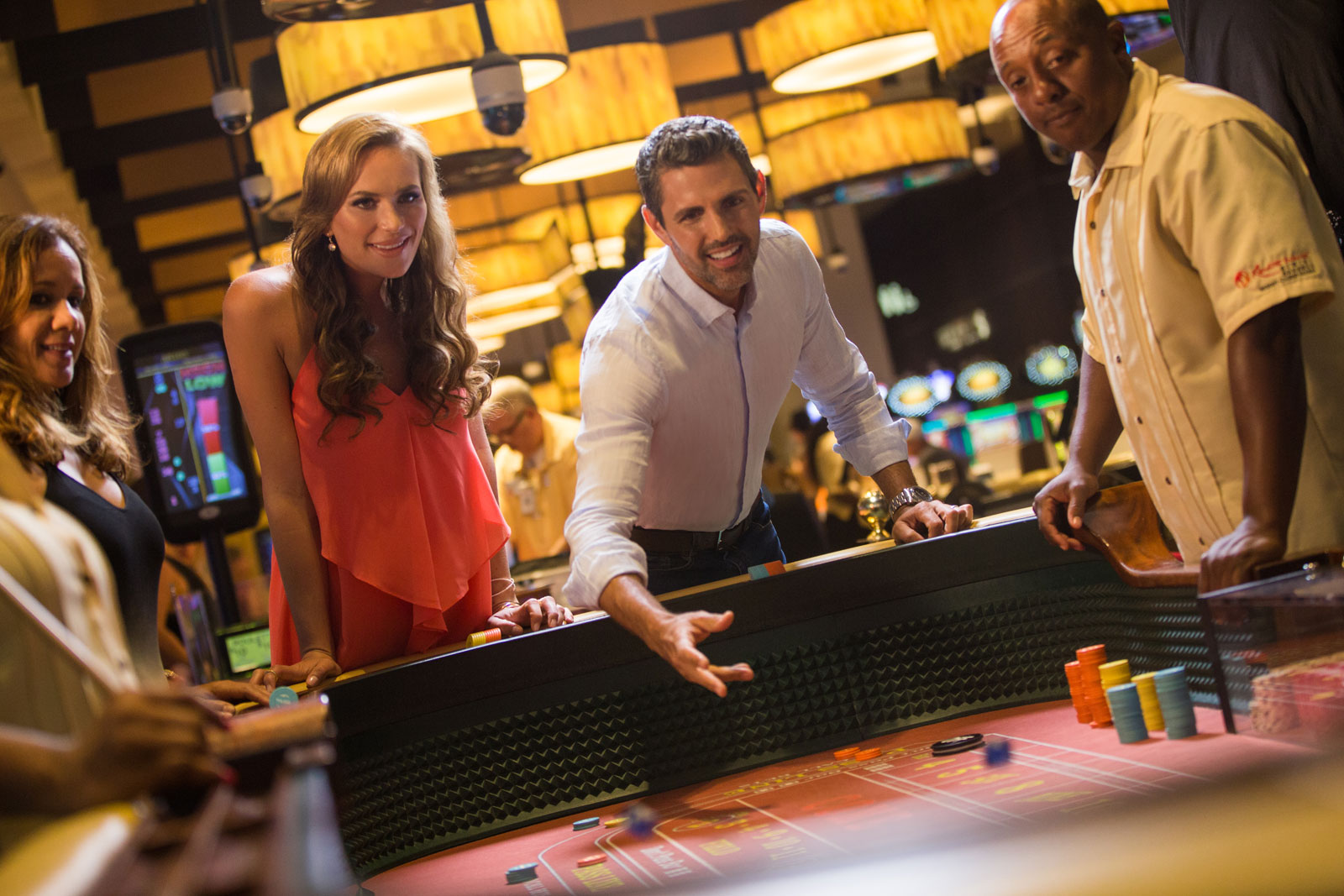 Not to be outshined by its sibling in Hollywood, Florida, Hard Rock Hotel & Casino Biloxi showcases the same level of glitz on its memorabilia-filled gaming floor — 50 tables, 1,300 video and traditional slots — and in its glamorous rooms and suites overlooking the Gulf of Mexico. A swim-up bar anchors the palm-lined pool and private cabanas; come on Sundays for in-season for parties with live music and specials. Relax and recharge at the Rock Spa, the Body Rock gym or at the signature restaurants like Half Shell Oyster House and Ruth’s Chris Steakhouse. Sign up for the “Sound of Your Stay” program and have your room equipped with a Fender guitar and amp. Want to  rock your own boat? Stay at Biloxi Small Craft Harbor, just half a mile away.