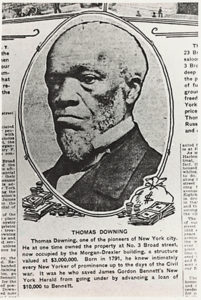 With crystal chandeliers glistening overhead and plush carpets laid out under their feet, the city’s elite felt quite at home in the upscale oyster bar located in downtown New York City. Every night the place was packed with A-list dignitaries, industrialists, merchants, bankers, politicians and society women, sipping champagne and nibbling on the region’s finest oysters.

You might wonder how such 19th century opulence is linked to the Chesapeake Bay. The story begins on the Eastern Shore of Virginia in the late 1700s when the Methodist religion was fanning out across the area’s rural enclaves. Unlike many Southern denominations, this branch of the Protestant faith adamantly opposed slavery. The newly converted could be expelled from the church if they did not free their slaves within a year of joining a congregation.

Around 1780, a wandering Methodist preacher arrived in the Chincoteague area with the Bible in his hand and conversion on his mind. Captain William Downing, a wealthy landowner from nearby Oak Hall, was filled with such religious fervor from the preacher’s sermons that he saw the light and freed all his slaves.

Among the emancipated was an African-American couple who became caretakers of the church’s meeting house in Accomack County, Virginia. They bought a parcel of land on a Chincoteague inlet just south of the Maryland State Line and gave birth to their son Thomas Downing in 1791.

Young Thomas, who was born free in a state that sanctioned slavery, grew up nestled in the Chesapeake’s marshlands and seaside coves. The shoreline was his playground and classroom, where he learned how to fish the waters, handle a boat, dig for clams, catch terrapin — and most important to the story — harvest oysters.

Wanting more than the life of a waterman, Thomas left home and followed troops from the War of 1812 to Philadelphia. He married, had children and spent years working in an oyster bar. When he heard that many free blacks were working the oyster beds of New York, he headed farther north.

In 1819, Thomas Downing is listed in the New York City census as an oysterman. He rented an apartment for his growing family and bought a skiff that he sailed across the Hudson River into the bountiful New Jersey oyster flats. Using skills he learned on the Chesapeake, he tonged for oysters and earned the reputation for delivering plump, flavorful bivalves.

In the early 19th century, most oyster cellars were rough and tumble joints in murky basements that floated a red balloon above the doorway to attract customers. Respectable ladies dared not enter. In 1825, when Thomas Downing opened his oyster cellar at 5 Broad Street in lower Manhattan, he had greater plans in store.

Today’s oysters are often considered pricey, luxury items, but back in the turn of the 19th century, everybody from paupers to presidents ate oysters. Downing envisioned a unique style of oyster cellar that cultivated an elite following. Location helped. Just a stone’s throw away from the prosperous crowds of the Merchant Exchange, Customs House, Wall Street, banks and stores, his high-quality oysters drew a top-tier clientele. To satisfy their discriminating palates, he tapped into the network of oystermen he befriended during years of working the water and wharfs. 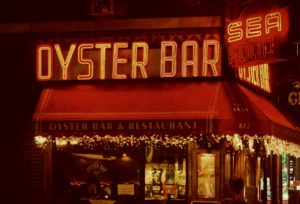 To create a reputable ambience, he decorated his oyster cellar with elegant décor including mirrored hallways, polished chandeliers, luxurious rugs and lavish curtains. Upper-crust women could comfortably dine with their husbands. It was the place to be seen during the pre-Civil War 1830s to 1860s.

At the peak of his success in 1842, Downing was chosen to cater the Boz Ball, a grand society event to welcome British writer Charles Dickens to America. With more than 3,000 attending, the feast presented 50,000 oysters, 40 hams, 76 tongues, 50 rounds of beef, 50 jellied turkeys, 25 ducks, 2,000 mutton chops and more. The day went off without a hitch, and Downing was showered with praise.

Amidst the glamour and glitz, Downing never forgot his Chesapeake roots. His cellars often harbored runaway slaves escaping to the North with the Underground Railroad. He helped establish New York’s Anti- Slavery Society and was part of the African Free Schools to improve black children’s education. His generosity knew no bounds. When Thomas Downing passed away in 1866, the New York City Chamber of Commerce closed its offices for the day to honor this son of Chesapeake slaves and esteemed businessman.

If you’d like to experience Chesapeake oyster bars that emulate Thomas Downing’s pizzazz, head over to these eateries that are housed in buildings erected during the 19th century: 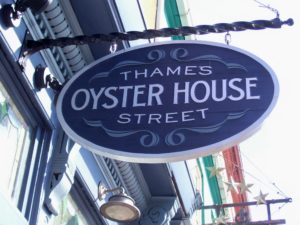