A few months before Hurricane Maria struck, my family vacationed in Puerto Rico. After making several trips to this delightful destination over the years, I knew the island offered plenty of activities to engage and amaze my two teen boys.

Our Puerto Rican adventure was glorious. We strolled Old San Juan’s busy streets devouring fresh seafood and absorbing the lively cultural scene. We climbed invincible stone steps of 16th- and 18th-century forts, and the city’s statues and monuments schooled us on the island’s rich history. We were captivated by vibrant modern paintings at the Puerto Rico Museum of Art. The massive radio telescope at Arecibo Observatory left us awestruck.

Manmade achievements wowed us, but the island’s natural beauty stole our hearts. Lounging at the beaches and snorkeling in Icacos Island’s pristine waters delivered precious days. We toured the primordial caves at Rio Camuy Park and hiked the timeless trails of El Yunque’s plush rain forest. My sons laughed like boys again when bioluminescent organisms put on a dazzling light show in the night waters. But by the time our suntans started to fade, we heard weather warnings of hurricanes threatening our enchanting island. Sitting safely in our Washington, DC home, we wrung our hands and watched TV footage of Maria damaging places where we’d built treasured memories. We followed every heroic step of its recovery and celebrated when electricity finally illuminated the streets of Old San Juan again. Now, 18 months after the storm has passed, we’re pleased to say the Puerto Rican people have persevered, are rebuilding and are welcoming guests.

Abundant sunshine and the right amount of rain are encouraging plants to replenish the island, and landscapes that make me wish I could paint are returning to their
lush leafy green. With habitats making a comeback, wildlife is following suit. Exotic birds are squawking, and the tiny coquí frogs have resumed their nocturnal serenades. El Yunque is open, with many of the recreation sites and roads accessible or under repair, and bioluminescent marine creatures are glowing back at stars in the evening sky. 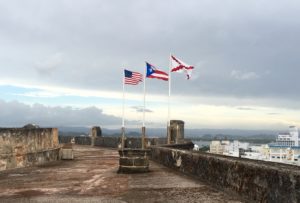 Offshore, aquatic life is flourishing. Snorkelers are thrilled by the colorful parade of parrot fish, sea turtles, crustaceans, coral and more. The reefs are also improving, thanks to help from National Oceanic and Atmospheric Administration and Sea Ventures. Anglers are hooking snook, tarpon, tuna, mahi-mahi and other trophy fish in nearby waters. As a result, Club Nautico in San Juan and Puerto Del Rey Marina in Fajardo hosted annual billfish tournaments with record numbers of attendees. The picturesque islands to the east took a hard hit from Maria, but they are rebounding, with Culebra a bit ahead of its neighbor Vieques.

BUSTLING WATERWAYS AROUND THE ISLAND

The island’s six ports, including San Juan, Fajardo and Ponce, are all up and running. About 15 cruise lines — Carnival, Windstar, Royal Caribbean, Norwegian and Princess, to name a few — offer special excursion packages while docking in San Juan. The Moorings, a charter company with a fleet of sailing catamarans, monohulls and power yachts, is creating upscale vacations by offering charters out of Puerto Del Rey Marina.

Most of the marinas are back in business and running at 100 precent pre-hurricane status, including Marina Puerto Del Rey, Marina Pescaderia in Cabo Rojo, Club Nautico de San Juan and Club Nautico de Ponce and San Juan Bay Marina. Marinas that sustained hurricane damage but are functioning include Villa Marina, Palmas del Mar and Marina Puerto Chico. The marina at El Conquistador Hotel, racked by Maria’s wrath, has shut down for now.

“We were hurt, but we are back, and we want people to come see how far we have come and how much our island has to offer,” says Carolina Corral, chief executive officer at Puerto Del Rey, a 1,000-slip marina in Fajardo (about 37 miles east of San Juan) that accommodates vessels up to 180 feet. All the slips are in tip-top condition, and the marina has reinforced the breakwater with denser rocks and higher walls to improve retention in any winds they encounter.

From quaint boutique inns to indulgent resorts, Puerto Rico’s hotels are resurrecting bigger and better than before the storm. New places are popping up along the coastline to fulfill all types of vacation dreams. Serafina, the first new hotel to open after Maria, has a chic beach house vibe and a trendy poolside scene overlooking Coronado Beach. A new Four Seasons will launch at Puerto Del Rey in late 2019. 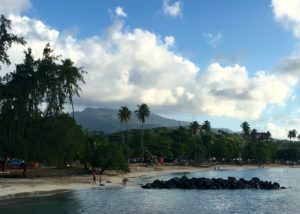 The Who’s Who of San Juan’s luxury hotels is again ready to entertain you in style. Built in 1919, the historic Condado Vanderbilt Hotel appeals to upscale travelers. Hotel El Convento, a restored 17th-century convent, offers old-world charm and Spanish Colonial décor. La Concha Renaissance Resort and The Ritz-Carlton are eager to brighten your
days in San Juan.

The condition of Puerto Rico’s beaches plays a key role in the hotels’ success. From the west to the east side of the island, the waterfront has resumed its gorgeous allure. The western beach communities near Rincón are rejuvenated with a California-style vibe, complete with surfing, farmers’ markets and organic foods. The hidden coves of Culebra to the east provide heavenly getaways for visitors seeking secluded beaches.

José Andrés, universally celebrated as a hero during Puerto Rico’s disaster, served more than three million meals during Hurricane Maria’s aftermath. He continues to support the island’s recovery and encourage restaurants to reopen their doors. And chefs are cooking more than mofongo. A cornucopia of cuisines is bolstering a restaurant renaissance based on innovative dishes crafted with fresh local ingredients. 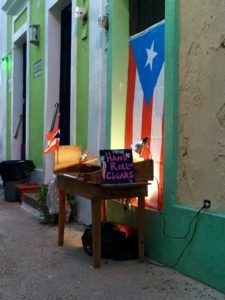 The culinary scene has seen a surge of new restaurants offering everything from traditional Caribbean seafood to flavorful fare from around the globe. Locals
recommend a few favorites: Acapulco for Mexican, Bocca for Italian, Pauline Escanes for pastries and desserts, Cueva del Mar for seafood and signature Bloody Marys and La Estacion, a refurbished gas station, for finger-licking barbecue. The best news for adventurous foodies is the kiosks at Luquillo near Fajardo are back at the beach with their delectable display of
Puerto Rican dishes.

YOU CHOOSE: RELAX OR EXPLORE

It’s tempting to dig your toes in the sand on Puerto Rico’s miles of stunning beaches. But you’ll be glad if you fold up your towel and discover the unique attractions around the island. Here are some of our favorites:

Discover a 16th-century fort in Old San Juan with remarkable architecture and an enthralling past. Nearby Castillo San Cristóbal is a must-see citadel for history buffs.

Arecibo Observatory
787-878-2612
Prepare to be amazed on a tour of the world’s second-largest, single-dish radio telescope, sponsored in part by the National Science Foundation.

Caguana Indigenous Ceremonial Park
787-669-1866
Visit the stone ruins of the Taino people, who were the original indigenous residents of the island. The underground tour of nearby Rio Camuy Cave Park is worth a detour.