Saint Lucia is a petite sovereign island nation located between the eastern Caribbean Sea and the Atlantic Ocean. Lying northwest of Barbados and south of Martinique, its 238 acres of lush tropical landscape have been governed by the French and British over centuries. After winning its independence in 1979, Castries became the capital city, as well as a popular cruise port. 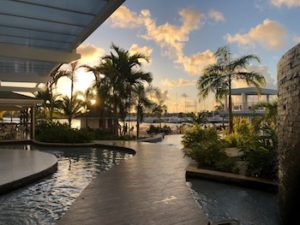 Two dramatically tapered mountains, the Pitons, stand on its west coast, and the entire coastline is speckled with volcanic beaches, reef-diving sites, luxury resorts and fishing villages. Trails in the interior rainforest lead to dramatic waterfalls, such as the towering Toraille that cascades over a cliff into a garden.

For our honeymoon, my wife and I spent a week mainly in two parts of St. Lucia, Rodney Bay and Marigot Bay, and also took a jaunt down the coastline to Sugar Beach. We began at the Harbor Club in Rodney Bay, which is a lovely resort with a stunning bay view, spectacular swimming pool and terrific food.

Rodney Bay is located in the Gros Islet of Saint Lucia on the northwestern coast above the Castries quarter. Local shops present plenty of opportunities to pick up unique Caribbean items, and restaurants serve an array of foods from brick oven pizza to just-caught seafood. IGY Rodney Bay Marina, next to the hotel, has gift shops, a farmer’s market and charming restaurants, and The Moorings offers catamaran charters. All kinds of vessels, from small local boats to mega yachts and sport fishing crafts, stop at the marina for fuel and more.

Our hotel, Harbor Club, has a beach located on beautiful Pigeon Island that you can get to by launch from the resort. At this 44-acre islet on the norther tip of the bay, we happened upon Roots & Soul Festival with UB40 as the headliner. Locals sell fresh fruits from their boats to people swimming in crystal clear water. Here we met Malakai, who owned a boat and offered to take us on a cruise down the coast to see the country.

With Malakai at the helm, we left Rodney Bay and headed south along the shoreline to Marigot Bay. The seascape along the way is magnificent with turquoise waters leading up to dramatic ragged cliffs along the shoreline. Local fishermen toss nets out for fish and wave to passersby. Each boat sports a unique color and design.

Marigot Bay is often used to harbor boats during hurricanes and is an historic site for French and British navy battles during the colonial era. It gained notoriety from the 1967 film Dr. Doolittle starring Eddie Murphy and offers a range of accommodations from hotels to charming Airbnbs owned by local artists. This charming town is laced with resorts, restaurants, retail stores and boats. Doolittles Restaurant, the film’s namesake, has a quaint atmosphere and delectable dishes of fresh fish and local ingredients.

From Marigot Bay, we cruised south to Soufriere’s, a fishing village that was once the capital of Saint Lucia. Outside of town, Malakai’s friend “The General” took us on an excursion to a volcano, where on the slope of a crater we watched hissing steam escape from fissures and dozens of natural boiling caldrons bubble with water and mud.

Most regional volcanic activity happens in Sulphur Springs National Park. Classified as semi-active, the volcano does not produce molten lava flows or shoot red hot rocks into the sky. Steam and ash are its trademark, along with a persistent smell of sulphur.

Near the entrance to Sulphur Springs, a small bridge straddles the stream near a pool where visitors take therapeutic mud baths in geothermally heated water that is reportedly good for the skin. Just down the road, Toraille Waterfalls washes the mud away. Local vendors stack tables with items such as rum, fruit and coconut bread as the majestic Piton mountains hover high in the distance. Resorts facing the Pitons present a fantastic view of this World Heritage site. 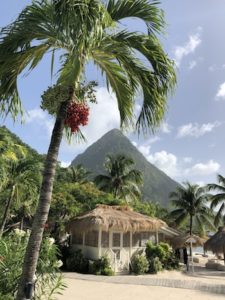 Our last stop was Sugar Beach, nestled between the Piton Mountains. Its white crystal sand

creates one of the most stunning beaches in Saint Lucia, naturally designed to relax and appreciate the Caribbean Sea’s splendor. Sugar Beach Resort dominates part of the beach, but

the northern section is open to the public through the Viceroy Resort and is an idyllic spot to snorkel or just float around.

Surrounded by a plush rainforest and the Piton mountains on each side to frame the view, Sugar Beach is a must-see destination. On land you can hike though tropical foliage or zip line down slopes for the bird’s eye view. Shops, restaurants and hotels are plentiful near the harbor that teems with fishing boats and pleasure cruises