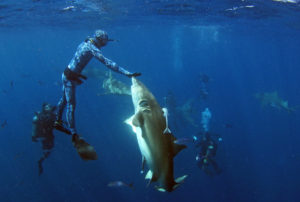 A young man playing in the surf off a Cape Cod beach is suddenly attacked and killed by a shark, most likely a great white. This national headline was enough to send chills down the spine of anyone contemplating a trip to the ocean, let alone actually swimming in it

But is it really that dangerous, and what are the odds of being attacked and killed by a shark? About 75 million people swim at America’s beaches each year. According to the International Shark Attack File, the risk of death from a shark attack is one in 3.7 million around the world. In the United States, there are on average 16 shark attacks a year with one fatality every two years.

Florida is the number one state for shark attacks. Primarily in the winter months, thousands of sharks, mainly black tip, migrate south from the Carolinas seeking warmer waters. These are generally coastal sharks, where chance encounters with humans are the highest. I have witnessed from atop Hillsboro Lighthouse (Hillsboro Inlet, FL) people playing in the surf, oblivious to numerous sharks swimming among them. The sharks were clearly disinterested in the humans, who were completely unaware of their close proximity to what they would have perceived as “Jaws.”

From the sharks’ perspective, they should be terrified of humans. About 100 million sharks a year are killed, primarily for shark fin soup, a traditional delicacy in Asia. People gain no nutritional value from consuming shark fins. Adding to this heartbreak, in most cases only the fins are taken and the rest of the shark is thrown overboard. Most shark species need to swim to breathe. With no fins, they sink to the bottom and suffocate. It should be noted that as fish populations decrease in productivity, shark meat is becoming more valuable in some countries.

Generally, sharks don’t reach sexual maturity until they are 7 to 15 years old. Gestation can last from three months to two years depending upon the shark species, of which there are nearly 500.

Without intervention sharks cannot produce enough offspring to stay ahead of the slaughter of 10,000 sharks per hour. As top predators, sharks maintain structure in the food web. Through consumption and intimidation, they keep mid-level predators from flourishing and eating smaller fishes, particularly algae-eating fish. Without this order, the future of the oceans is bleak.

Loss of habitat from overdevelopment and thoughtless human pollution multiply the stresses not only on the sharks, but also on the entire marine ecosystem. We humans had better start paying attention. 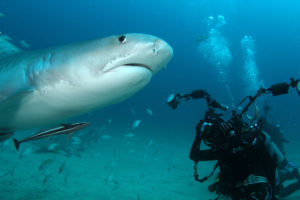 Six divers are kneeling on a white, sandy bottom in 25 feet of water less than a quarter mile off the western shore of Bimini, Bahamas. Visibility is in excess of 100 feet. A slight to moderate current is running, and I have overweighted myself to stay planted on the bottom. I double check my camera and strobe lights by taking a few photos of the numerous nurse sharks hanging around the food bucket that is only a short distance away. We are clients of Nomad Diving, a global adventure travel diving business. Most of us are photographers.

About 35 minutes into the dive, I get my first glimpse of why we are here. Approaching from down current is a great hammerhead shark. She is around 12 feet long and very cautious in her movements. Our shark feeder holds out a chunk of barracuda and releases it just in front of her. She opens her mouth, gently bites down on the bait and swims off into the blue only to return again, this time with a bit more confidence. Our hammerhead spends about 30 minutes with us before returning to the deep.

Of all the sharks, the great hammerheads are probably the most agile. Their wide heads and ability to turn quickly help them find and catch their main prey, sting rays. The position of their eyes on the ends of their hammers enables them to see extremely well, particularly in the vertical plane. The International Union for the Conservation of Nature (IUCN) lists great hammerheads as endangered, primarily from overfishing.

Since 2011, the Bahamas have banned commercial shark fishing in their waters. The sale and possession of sharks and shark parts is forbidden. Among the many benefits of this conservation effort is $100 million or more in shark tourism generated for the country. Divers from around the world come to observe and/or photograph apex predators such as tiger sharks, bull sharks and hammerheads. Oceanic white tip sharks, once the most numerous sharks in the oceans, can be found off the coast of Cat Island. Their numbers have been reduced almost 90 precent by overfishing. It is one of the few places in the world where one can predictably encounter these beautiful open ocean creatures.

You don’t have to be a scuba diver to appreciate the sharks of the Bahamas. Bimini Shark Lab, a well-known research facility located on South Bimini, offers tours where visitors meet juvenile lemon and nurse sharks held captive in pens for research. Bimini Lagoon (North Bimini) is the home nursery to many juvenile lemon sharks, which spend their formative years there in relative safety before venturing out into the world. Here too, deforestation of the mangroves by commercial interests has cost the lemon sharks dearly. A 2014 survey stated that only 26 percent of the young lemon sharks survived, due to a lack of food sources that normally live in the now disappearing mangroves.

Snorkeling in the Bahamas presents non-threatening opportunities for encounters with sharks, particularly the relatively docile nurse sharks. For breathing, these sharks can remain dormant on the bottom and pump water through their gills. Do not harass these fish, however, as they will defend themselves. 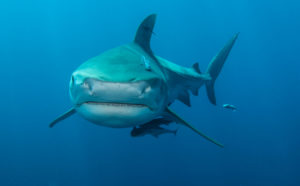 Like paratroopers in a low-flying military aircraft, 10 divers rapidly step off the stern of the dive boat Emerald. We are miles offshore. The dive plan is to descend to 100 feet and drift with the northerly current. Within 10 minutes we see six bull sharks 50 feet below us. It takes some time, but slowly, carefully, they approach our professional shark diver, Joshua Eccles, who offers them bits of fish from a food crate. These are apex predators, yet they treat us with great caution. On the second dive of the day, we encounter lemon sharks. No doubt some of them, having reached adulthood, traveled here from Bimini, 60 miles away. As we watch, Josh removes fishing hooks from two of them. Minutes later, off in the distance, we observe a dark shape that unhurriedly proceeds in our direction. It’s a big tiger shark, and upon arrival she leisurely inspects each of us. She is so close to me that I nudge her away with my camera. She approaches Josh, and he feeds her fish parts. Almost lazily she swims among us. We watch her carefully until she silently departs. She is beautiful.

Every day around the world, hundreds of divers have made these types of dives, and very few injuries occur. People are rarely taken and consumed by sharks. It is almost always a case of mistaken identity; the shark bites once and then departs. Humans do not taste like marine life.

Those of us who work and play on the water must bear some responsibility to ensure a healthy marine environment for future generations. The fictitious Hollywood shark should remain beached in the studio. The reality is that sharks are not likely to harm us and are extremely important to the marine ecosystem. If you would like to support shark preservation efforts, contact the American Shark Conservancy at americansharkconservancy.org 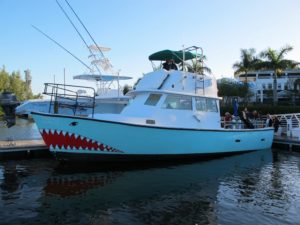 Should we be afraid of sharks? The answer is no, but be respectful. Most shark encounters result in a fleeting glimpse of the fish as it swims off. However, if it remains uncomfortably close to you or you wish to avoid an encounter, follow these rules.