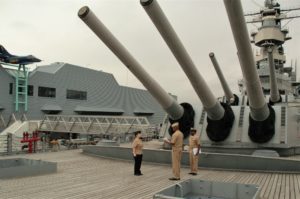 Nearly 90 museum ships are anchored in ports across the United States, including many of the biggest and best military vessels — battleships, aircraft carriers, submarines, destroyers — some serious iron, as they say.

This year’s 75th anniversary of D-Day focused the spotlight on these magnificent warships, many of which saw action in World War II. Naturally, they are extremely popular with former crewmen as well as veterans who served aboard similar ships and people who just love these vessels for the seagoing history they represent.

A vast fleet of museum ships are located along the Atlantic Coast and Gulf of Mexico, with another dozen or so anchored in the Great Lakes, Pacific Coast and Hawaii. No matter where your cruising takes you, one of these floating monuments to U.S. Naval power is never far away.

In this two-part series, we’ll travel to dozens of these battle-tested behemoths. Part one covers the Atlantic Coast and Gulf of Mexico.

Cassin Young’s most severe test came just 16 days before Japan surrendered, when a kamikaze slammed into its starboard near the forward smokestack and set off a tremendous explosion. As the ship lay dead in the water, the crew contained the damage, restored power to one engine and got the ship underway within 20 minutes. After serving in seven battles in WWII, she is now on display at The Charlestown Navy Yard near the USS Constitution (Old Ironsides).

Where To Dock: Charlestown Marina

Affectionately named “Big Mamie” by her crew, the Massachusetts was built at Bethlehem Steel’s Fore River Shipyard. She has the unique distinction of firing the first U.S. 16-inch projectile in WWII during the invasion of North Africa and the last American 16-inch projectile in that war. In 1951, the destroyer Joseph P. Kennedy, Jr. was engaged in the attack on North Korea, and in 1962 she was dispatched to the Caribbean to join the naval blockade of Cuba. These ships now reside in the harbor along with a submarine and PT boats.

Where To Dock: Borden Light Marina 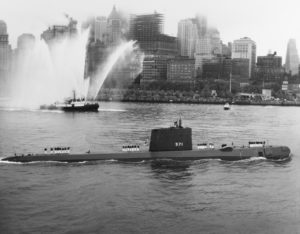 In 1954, Nautilus became the first commissioned nuclear-powered vessel in the U.S. Navy. Four years later, she left Pearl Harbor under top secret orders to conduct the first crossing of the North Pole by a ship and was the first to reach the geographic point 90° North. She shares her home on the Thames River with midget submarines and an immense archive of naval artifacts and documents.

Where To Dock: Pine Island Marina

Where To Dock: Liberty Landing Marina

Directly across the Delaware River from each other, these ships span 100 years of maritime service. Olympia launched in 1892; New Jersey was decommissioned in 1991. Olympia is the oldest steel warship in the world still afloat, and in 1898 it was Commodore George Dewey’s flagship at Manila Bay in the Philippines, where it fired the first shots of the Spanish-American War. With 19 battle and campaign stars, New Jersey is the most decorated battleship in U.S. history, having seen action in WWII, Korea, Vietnam and Lebanon.

Where To Dock: Wiggins Park Marina

This trident of maritime history is maintained by the National Park Service and offers a cross-section of ages, designs and service. Constellation is the only surviving ship from the Civil War, while Torsk sank the last Japanese warship in WWII. The Coast Guard cutter Taney is the last surviving warship still afloat from the attack on Pearl Harbor, firing on Japanese aircraft from its berth in Honolulu Harbor. The vessels now float in the heart of the Inner Harbor near a science center, aquarium, restaurants and shops.

Where To Dock: Inner Harbor Marina

The Wisconsin, a massive warship that earned five battle stars in WWII, collided with the destroyer Eaton in a heavy fog off the Virginia coast in 1956, causing major damage to her bow. To speed repairs, a 120-ton, 68-foot section of the bow of Wisconsin’s sister ship Kentucky was transported across Hampton Roads to the Norfolk Naval Shipyard and grafted onto the Wisconsin in just 16 days. She now rests next to Hampton Roads Naval Museum, which houses a rich collection of maritime uniforms, weaponry, underwater artifacts and ship models.

Where To Dock: Tidewater Yacht Marina

In 1942, a Japanese submarine scored a direct hit on North Carolina, striking the ship 20 feet below the waterline and tearing a massive hole in her plating. The torpedo inflicted 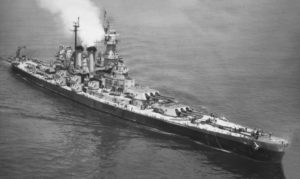 surprisingly little damage, and flooding was quickly contained, allowing the battleship to remain off Guadalcanal until the U.S. convoy withdrew. Visitors can look across the river at Wilmington’s downtown Riverfront Park while learning stories of the ship’s crew and Pacific Theater combat.

Where To Dock: Port City Marina

The aircraft carrier Yorktown was supposed to be named Bonhomme Richard, but she was renamed Yorktown to commemorate the loss of USS Yorktown (CV-5) during the Battle of Midway in June 1942. Laffey earned the nickname “The Ship That Would Not Die” during the battle of Okinawa, where she was badly damaged by four bombs and six kamikaze hits. Patriots Point is located in Charleston Harbor at the base of the Ravenel Bridge, just five minutes from downtown.

Alabama delivered sailors and marines to the initial occupation of Japan in 1945 and later returned 700 men to America as part of Operation Magic Carpet. Submarine Drum received 12 battle stars for her WWII service and is credited with sinking 15 ships and 80,580 tons of enemy shipping, the eighth highest of all U.S. submarines in Japanese tonnage sunk. Both vessels are anchored in Mobile Bay, less than two miles from downtown Mobile.

Where To Dock: Dog River Marina

Kidd is named after Rear Admiral Isaac C. Kidd, who died on the bridge of the flagship Arizona during the 1941 Japanese attack on Pearl Harbor. Admiral Kidd was the first U.S. flag officer to die in WWII. Kidd was never modernized and is the only destroyer to retain its WWII appearance. The historic ship is anchored on the Mississippi River in downtown Baton Rouge. 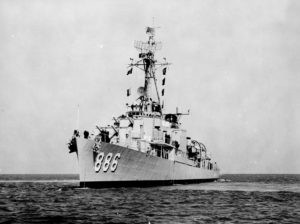 Commissioned at the end of WWII, Orleck served in Korea and Vietnam. During the Vietnam War, the ship gained the reputation of top gun after firing more rounds to support U.S. ground troops than any other vessel. She earned the nickname, “Grey Ghost of the Vietnam Coast” for providing fire cover for pinned-down marines who called for assistance. Oreck is docked on the Calcasieu River, north of downtown Lake Charles.

Lexington is a true survivor. She was the fifth U.S. ship to bear this name in honor of the famous Revolutionary War battle. During WWII, the Japanese reported that the aircraft carrier had sunk four times, yet each time she returned to fight again, leading Tokyo Rose to nickname her “The Blue Ghost.” The Texas State Aquarium, the Texas Yacht Club and several good restaurants are within easy walking distance.

How to Save Our Ships 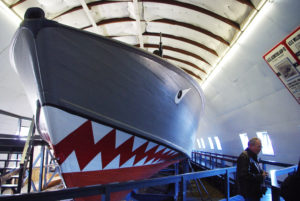 Preserving and maintaining an aging warship is an expensive endeavor. Regular upkeep that was done by crews of hundreds when these ships were in service now must be carried out by skeleton crews of staff and volunteers for a fraction of the cost.

No single organization oversees the preservation of decommissioned vessels, so each museum ship relies on local boosters, ex-crew members, visitors and other private funders to raise money and stay afloat.

To acquire the battleship North Carolina and prepare its berth in Wilmington in 1961, local resident James Craig and other supporters raised $250,000, the equivalent of $2.1 million in today’s dollars. Many historic ships rely on grants and regional economic groups for funding, but that’s often hit or miss. Some years are better than others, and time is the ever-present enemy.

USS Clamagore, an aging submarine that’s part of a museum ship fleet at Patriots Point, SC, is embroiled in a legal battle between the state legislature and preservationists who will determine whether the sub is repaired (costing about $9 million) or sunk as a reef (for a relatively paltry $2.7 million).

The bottom line: If you want to ensure that these majestic vessels are preserved for future generations, give whatever you can — admission fees, your time, support for local fund drives and grant initiatives. Remember: One person can make a difference. Just ask James Craig.