Monitoring Systems – Early detection takes stress out of your travels

Modern marine engines have come a long way from the sputtering, oil-dripping beasts they used to be. Electrical systems with smart chargers, inverters and advanced sealed batteries are light years ahead of the leaky blocks of energy that used to start our engines and power our coffee makers. Today is the age of Monitoring Systems.

Despite improvements, items still wear, and parts break down. The challenge for vigilant boaters is to monitor a vessel’s systems in a measurable way, so you know something is wrong before getting stuck at the pier on a beautiful weekend morning or calling for a tow when you’re broken-down and adrift.

The Heat Is On

Your body has a normal temperature, and when you’re sick you may run a high fever. Many components on your boat are the same. Knowing items’ normal operating temperature will help you monitor performance. Alternators, hydraulic systems, transmissions, battery chargers and 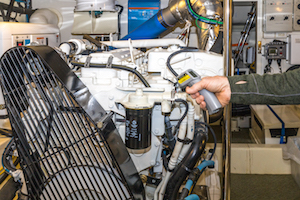 pumps are a few of the items whose temperatures can be monitored with a small handheld infrared temperature gun, which are inexpensive and readily available. I consider those so important to our boat’s operations that I keep an extra in the spares kit.

Regular engine room checks with an infrared temperature gun can uncover many problems before they turn into large ones. It’s best to develop a list of items to monitor in the engine room and perform them in the same order every time. You should do the first engine room check within the first 30 minutes to one hour after getting underway. This gives everything in the engine room the opportunity to come up to normal operating temperature and the chance to discover problems before you’re miles offshore or while it’s still easy to return to your marina.

On long runs, repeat checks on a regular basis through the entire trip. Some engine rooms are easier to access while underway than others. If you don’t have a walk-in engine room, one of the advantages of the infrared temperature gun is that you can read the temperature of important items just from lifting a hatch. Always make sure you follow safe engine room practices, such as wearing hearing protection and removing loose clothing or sunglasses when near a running engine.

From the Engine Room to the Helm

The next level of performance is to bring as much of this engine room information as possible to the helm. In doing so, your systems’ status does not solely depend on engine room checks. Large yachts and commercial vessels often have sensors permanently attached to critical components. These sensors send information to a display at the helm, programmed with alarm parameters, and give early notification of a problem. Several manufacturers have introduced similar systems for easy and economical installation on small and medium recreational boats.

The big benefit of these centralized monitoring and alarm systems is that you can easily configure them to suit a specific boat. From the temperature of a bearing to the cycle times of bilge pumps, the systems monitor a vessel’s critical components and alert you when any piece of monitored equipment is outside its defined running parameters.

The systems allow you to set early warning signals at thresholds relevant to the specific equipment that needs monitoring. This improves alarms’ accuracy and avoids nuisance notifications. When an alarm is activated, the unit at the helm will accurately pinpoint exactly what the alarm pertains to, and you can take corrective action immediately, with no wasted downtime trying to identify the problem.

Beyond monitoring engine data, many systems allow complete monitoring of all aspects of your boat’s operation including navigation lights, fuel levels, battery voltage and DC charging systems. A critical piece easy to monitor with a helm-based system is coolant water flow. Most power vessels would destroy a sea water impeller and possibly even the sea water pump if they sucked up a plastic bag or otherwise blocked an engine coolant thru-hull. A simply installed water flow sensor would immediately sense a loss of water flow, potentially saving the impeller, pump and an over heated engine.

Who hasn’t pulled anchor in the morning and run through the day, only to realize later that the anchor light stayed on all day? With multiple fuel tanks on many boats, more sophisticated systems allow you to total all the fuel and provide a single read-out of available reserves. You can program cycle times into many units to notify you if a bilge pump comes on more frequently than normal. Shore power can be monitored for voltage drops, giving a warning before sensitive equipment is damaged.

Helm-based monitoring systems offer an early warning that can prevent an otherwise simple problem from resulting in an expensive repair, downtime and the lost enjoyment of your boat. Voyages are more enjoyable knowing you are prepared to handle small problems when they arise. Protect your investment and the safety of those on board with a complete monitoring protocol for your boat.

Making Your List and Checking It Twice
Boat Towing Services
We Bought a Boat… Now What?
Get the Latest Scoop on Boat Monitoring Systems
Marinalife Magazine Articles