MARINALIFE IS PLEASED TO ANNOUNCE the winners of our 2021 Photography Contest. We tip our hats to the three finalists and four runners-up who rose to the top amid hundreds of images submitted for our annual shutterbug event. Competition this year was tough, as our judges sifted through snapshots of boating at its best, when friends and families built treasured memories, shared good times afloat and paused to marvel at the magic of nature. A special thanks goes out to our sponsor, Sunbrella, and all participants who sent pictures from around the country.

Lunch on the Island by Charlie Marks
As he sat down at a seaside café on Hydra Island in Greece, Charlie Marks noticed that he wasn’t the only one waiting for lunch to be served. A fisherman tied his workboat up to the dock, and three tabby cats gathered to inspect the catch of the day. When a fish tail flipped at the rim of a wooden box, an orange feline settled in, hoping for a nip or two of a fin.

That’s when Charlie pulled out his Nikon D300 and caught the shot. After working at Delta Airlines for 17 years, he was more accustomed to action photos from aviation events and air shows. But his passion for photography taught him to be at the ready when the right image presented itself. This new resident of Amelia Island hopes to expand his photographic collection into images of Florida’s wildlife, coastal living and incomparable sunsets.

My Personal Best Fish … for Now by Jason O’Brien
For avid anglers, the only thing better than pulling in a record-breaking trophy fish is being next to your son when he reels in his first big catch. While heading offshore on his friend’s boat called Kaos for a day trip out of Morehead City, NC, Jason hoped that seasickness wouldn’t hinder his seven-year-old son Hunter who dreamed about all kinds of aquatic species. Despite feeling a little green around the gills, Hunter sprang into action when he saw his rod dip and knew he’d hooked a big one.

Without any adult assistance, Hunter landed a whopper yellowfin tuna and held it steady while his dad snapped a photo with his cell phone. In addition to sharing a moment that neither one of them will ever forget, Jason notes that some people wait too long to have these experiences with their children. Giving them opportunities at an early age opens the door for unimaginable adventures together, and they’ll surprise you with how they rise to the occasion.

Surrounded by Cynthia ten Haaf
While tugging on her flippers and mask, Adellia felt a twinge of trepidation. She was about to take the plunge on her first snorkeling trip near Staniel Cay with her grandmother Cynthia, and this 13-year-old city gal from Michigan wasn’t sure what awaited her in the blue Caribbean Sea. Following her grandmother’s confident lead, Adellia lowered herself into the water and swam to a cave called “The Grotto” that was teaming with colorful aquatic life.

The warm water eased Adellia’s angst, but she still kept a tight hold of Cynthia’s arm as they explored the coral reef. Before long, a school of striped sergeant majors gathered around, curious about their human visitors. Cynthia suggested that Adellia might need to release her grip if she wanted to get a photo of this amazing spectacle. When she let go, Adellia’s love for snorkeling was born. Cynthia’s reflection on this remarkable shared experience: “When you have a chance to take your grandchildren to do something you love, they often get as much out of it as you.”

Marinalife would also like to congratulate four runners-up in the 2021 Photography Contest. Their images take us on a journey from daredevil dolphins and a family of rafting revelers to a gorgeous sunset and a precious toddler catching a few winks after a day on the boat.  Clockwise from the upper left photo, we thank the following photographers for sharing such memorable experiences.

All I Have to Do Is Dream by Mike Hechtkopf

Red Sails in the Sunset by Randy Lawson

They’re Doing this on Porpoise by Lyndon Seales 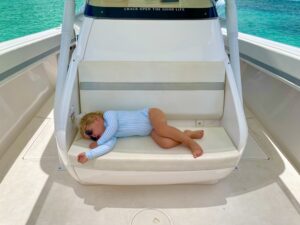 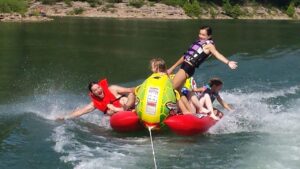 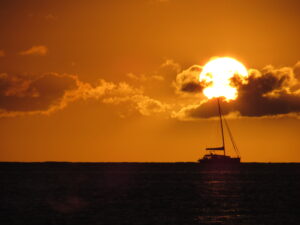 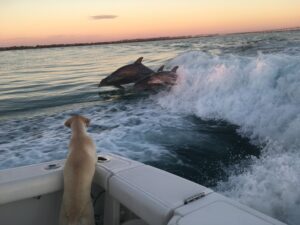