SIX YEARS AGO, we were in search of a little adventure aboard our 33-foot catamaran, Chewbacca. The timing seemed right, with our two young daughters ages five and seven, so we turned our backs on the rat race, sailed under the Golden Gate Bridge and turned left. 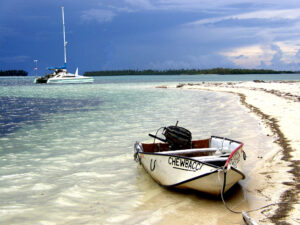 For a cruising family, life couldn’t get any better. What wasn’t to like — white sand beaches that stretched forever, living life at a snail’s pace and making new friends every time we dropped the hook.

Now, the hardest decision of the day was what novel to read or whether it was time to scrape the fuzz off the hulls. And for our daughters, decisions bounced between which coral garden to snorkel or whether to take the kayak or paddle their boogie boards to the beach.

As husband and wife, embracing the demands and challenges of cruising life had added a new fulfilling dimension to our marriage. I reveled in the simplest of pleasures: sailing under the glow of a full moon, laying in our cockpit counting falling stars as the heavens wheeled overhead, watching our girls run unbridled on a deserted beach or relishing the exquisite solitude of passage making.

Now at 11 and 13, the girls remembered no other life but venturing on a sailboat. Didn’t all dads stay home? Aren’t all kids homeschooled? Didn’t everyone migrate with the seasons and study the weather like their life depended on it?

A chorus of conch horns sounded as Bruce lowered the anchor into the clearest water, I’d ever seen, the exact shade of aqua as a swimming pool. We were under the spell of the San Blas Islands nestled in the curve of land where Panama and Colombia meet 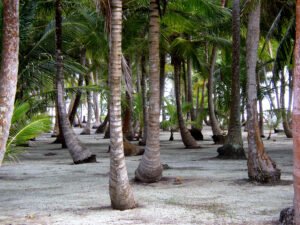 Our surroundings were striking, but unlike the harsh desert landscape of Mexico’s Sea of Cortez, gently swaying palm trees waved, sending an inviting soft whisper across the water. I was bewitched and found myself slipping quickly and contentedly into the island life. Days turned into weeks and weeks into months.

Island life was so peaceful that my greatest concern was getting conked on the head by a falling coconut as we idly swung in our hammocks. At first, I doubted the possibility of confronting death by coconut until I heard one fall and hit the ground with an audible “thud.” I had read somewhere that a falling coconut could reach 55 miles per hour when it dropped to the ground. Imagine being hit by a bowling ball traveling at freeway speeds. No wonder every year it’s estimated that 150 people die from falling coconuts. Most of them were laying down, enjoying a siesta from which they never awoke. I made sure that the first thing I did before stringing up my hammock was to check for these unassuming grenades high overhead.

At first, I laughed when I heard someone ask, “How many coconuts is that?” But here in the Kuna Yala it was true. Coconuts were still used as currency in the local island stores where a kilo of rice could be purchased with four coconuts. A can of SPAM cost 12 coconuts and a small bottle of cooking oil set the customer back six coconuts. It was literally a cash crop. Now I understood why visitors were warned to NEVER remove a coconut from an island. You were literally robbing a local of cold hard cash. 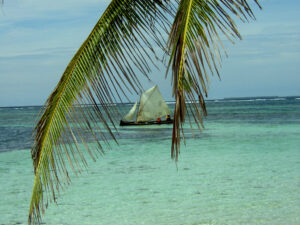 After schoolwork was completed, Kendall and Quincy searched the nearby waters for empty conch shells. With faces submerged and fins kicking in long practiced strokes, they snorkeled the shallows. They were eager to create their very own conch trumpet to herald new arrivals to the “pool” just as we had been welcomed. After a week of scouring the sandy bottom they each had a perfectly shaped specimen ready to craft. Hacksaw in hand, Bruce carefully trimmed off the tip of each shell to reveal the hidden chambers within. The girls then cleaned and sanded their mouthpieces smooth and with a little practice they mastered their new instruments!

Excited to share their new talents, the girls kept a keen eye seaward to spy any new sailboats entering our idyllic waters. With their arrival, the race was on to see who could welcome them with the longest horn blow.

Living away from civilization and being unplugged from our frenzied culture had taught me that it’s all about having the luxury of time to investigate even the smallest wanderings of my mind. It gave me great satisfaction. I dangled my feet over the side and reflected on the day’s events while my only companion was the setting sun radiating golden shimmers across the still water…waiting. 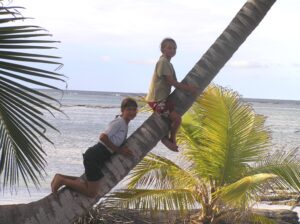 I took a deep breath and fixed my gaze to the west anticipating the fabled green flash that is said to mysteriously appear just as the sun is setting. I’d always been curious about this sailor’s tale. Was it true? For weeks, I made a point of being on deck just as the sun touched the horizon and I waited for that moment hoping one of the wonders of nature would reveal itself to me. So far, nothing.

Lucky for me, I had the time.

I took in the placid scenery, enjoying the moment and then…there it was! A flash of pale green light laid atop the molten sun just as it sank into the blue. Nature’s alchemy.

As a family, we’d struck it rich with the gift of island time.

Set Sail and Live Your Dreams (Seaworthy Publications, 2019) is the Winship’s book about their family’s 10-year adventure cruising aboard their 33-foot catamaran Chewbacca.  It’s available in both paperback and ebook at Amazon.