WHEN EMILY PATERAKIS walked into the room, her husband Yanni smiled in her direction and said, “See that woman? She’s my wife, and I’d marry her all over again.” In a heartwarming, unconventional way, Yanni did just that. Not with the trappings of a ceremony to renew their vows; instead, he swept her away on a journey that they would treasure forever. 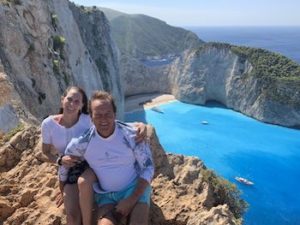 Last September, Yanni took his bride of 38 years to the Greek Ioanian Coast, where his family’s story began. His grandfather harkened from Chios, and his grandmother came from Samos, a pair of windswept islands on the Aegean Sea. After immigrating to Baltimore, his grandfather worked in a bakery, and the Paterakis family generations grew the business. Yanni was just a boy when he first made bread and rolls in the shop alongside his father, uncles and brothers.

At age 16, Yanni first visited his Greek ancestral homeland, and many years later, he and Emily enjoyed an Aegean cruise with their three children. But this trip would be different. This time, the two of them would break from the familiar and let wanderlust rekindle their spirits. Together they charted a route to places less traveled and would explore the intimate islands, timeless villages and romantic seaside of Greece.

Their choice of destination was made easy by the country’s geographic differences. Greece’s commercialized Aegean coast offered the bustle of Athens and crowds of tourists clambering on antiquities. The Ionian Sea to the west presented a more authentic Greek experience, where Yanni and Emily could cruise the shoreline surrounded by gentle winds and balmy waters. They would be travelers who could stop at whim, indulge spontaneity, absorb the unique seaside culture and marvel at the islands’ breathtaking beauty.

Soon their itinerary was set. They chartered a 52-foot-long by 27-foot-wide catamaran and island-hopped, starting in Corfu, cruising to Paxos, Antipaxos, Cephalonia, Zakinthos, Ithaca, Lefkada and Meganisi, and taking mainland excursions in Syvota and Vrachos.

The plan enabled Yanni to delve deeper into his Greek heritage and witness parts of himself in his Mediterranean roots. Emily’s personal warmth and grace would shine among the people they met, while her affinity for the outdoors would help her unearth a spirituality in nature. They would discover a new side of Greece — and a lot about each other.

The Grecotel Corfu Imperial, a luxury resort surrounded by azure waters and an alluring environment, was their first stay in Corfu. After savoring a stunning view of boats bobbing in the harbor, they indulged in long swims in a cove of the Ionian Sea and worked up an appetite for dinner at Contessa’s, a restaurant that features traditional Greek dancing.

While waiting for their adventure to begin, they strolled the town’s cobblestone streets, taking time to visit shops, meet the locals and sample bites of fresh ingredients at every meal. Fresh figs and olives from the produce market were divine. A drive to Palaiokastritsa on winding roads revealed goats meandering through olive tree orchards, bougainvillea draping colorful branches across grape arbors and vineyards sprawling across the countryside. After stopping at an olive oil production orchard, they enjoyed a sunset dinner at Eremitis Bar & Restaurant along the water.

At this port, as well as other towns on their journey, Yanni stopped at bakeries. The comforting aromas and irresistible pastries and breads brought back memories of home and sparked ideas for his business back in Baltimore. Fluent in Greek, his conversations with bakers and shop owners were lively, and new friendships were easily made.

After drinks and appetizers at the Olympia Café & Bar, they headed to the marina and set sail on the catamaran with friends from Baltimore. A traditional dinner of lamb, potatoes, Halloumi cheese, Greek salad and anise bread with pungent Greek organic olive oil welcomed them to the Ionian Sea. They arrived in Syvota, another picturesque town where the travelers began to unwind. An evening visit to the private Voutoumi Beach was magical.

The next stop was the Blue Caves of Paxos and Antipaxos. Photos cannot prepare guests for the astonishing seascape at these Ionian island gems. Mountainous white cliffs, which could only have been carved by the mighty hand of God, rise out of deep, turquoise water. According to legend, Poseidon’s marble palace was in Ahai, one of the caves of Paxos.

The crew tied ropes around huge gray rocks to offer easy access to and from the boat. Feeling as if they had entered a movie set, they relished the setting and dove into the pristine water. Snorkeling, swimming to the beach or drifting on a noodle was plenty of entertainment amidst such spectacular surroundings. Emily built a rock altar in gratitude for such a glorious day. Meals of just-caught calamari, octopus and fresh lamb with hummus were devoured after an invigorating swim.

The following day brought them to the private beaches near Lefkada, where the sea almost outshone the sky by sporting a stunning sapphire blue hue. Diving off the boat, they swam to shore and explored the Blue Caves. Feeling bold and invincible, they dove off towering Foki Bay Cliffs and ended the evening at Fiskordo’s. Tying two lines to the dock next to a fleet of gorgeous 100’ yachts, they snacked on frozen yogurt with walnuts, cinnamon and local honey, while Chef Costa prepared pan-seared fresh local Mediterranean Lavraki fish.

Cruising south, the catamaran docked at Pera Pigadi near the lower tip of Ithaca Island. They slept in late and awakened to rocking waves and the melodies of the sea. After a breakfast of eggs scrambled with Kasseri cheese, onions and local fruit, they sailed north through clear blue waters to Ithaca, home of Odysseus, the hero of the ancient Greek myth, The Odyssey. Inspired by the historic setting, Captain Yiannis captivated the crew with tales from Greek mythology about Helen of Troy, Achilles, Athena and Zeus. Continuing north, they passed the tiny Atokos Island, which is inhabited by goats that roam the gentle green terrain above dramatic white cliffs and pristine beaches.

Heading back toward Syvota, they ventured ashore to swim at the massive and astonishingly beautiful Papanikolis Cave at Meganisi, which is Greece’s second largest cave with an arched ceiling of layered rock dating back centuries. The hour-long cruise back to Lefkada lead them past the Greek mainland and through lochs teeming with sailboats and other catamarans. They paused along the way to take a dip at Two Rocks Bay, Acherontas, and admire the beaches and coves between mountains at Ammoudia.

Landing in Parga Harbor, they sipped drinks at Il Posto, and the breezes of a warm night lured them into sleeping on the bow under the stars. The next day, they visited Dimtri’s butcher shop where fresh ground lamb was made into soutzoukakia (meatballs). The local market provided garden vegetables, and Achilles Bakery rounded out the feast with just-baked delicacies.

One day blended easily into the next. Under the warm rays of the sun, they fed pieces of bread to fish to catch them only with a hook and string — the traditional Greek way. They lounged on white sand beaches, dipped in and out of the waves, and explored secret coves far away from signs of humanity. Evenings in coastal villages were filled with life’s simple pleasures: savoring candle-lit dinners, dancing to Greek music, and sharing stories with new and old friends.

Paxos provided a plethora of beach experiences for the crew. Kipiadi Beach, the longest stretch 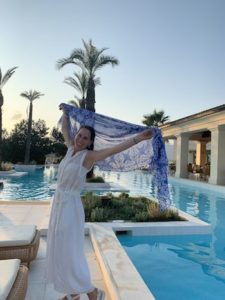 of sand on the island, offers stellar views of the seaside landscape. There they witnessed a spectacular sunset at Romantica rooftop bar that overlooks a harbor filled with boats of all shapes and sizes. In Bella Vraka Beach, they swam to a quaint cove with a sandbar in the middle of two beaches. A curious goat licked salt off Emily’s hand after a long swim. Lunch of octopus and olives was followed by a dip in Blue Lagoon and a tour of Notos Garden, which presents a stunning panoramic view with pink bougainvillea boughs draping over the forest walkway.

For an inland excursion, they drove to the traditional mountain village of Volimes, best known for its olive oil, honey and hand crafts. They travelled through acres of olive groves to Navagio or Shipwreck Beach and Agios Nickolas on Zakynthos, a village dating back to the 16th century. The next day delivered them to the secluded Agia Pelagia Beach and Xygia Beach, and they dined at Nobelos, where the restaurant owner shared stories about the Greek way of life.

As the journey was coming to an end, Yanni hired a 22’ yacht from Lesante Blu, and they cruised around the entire island of Zakynthos. The village of Agalas, on the west coast of the island, wowed them with pine and olive trees dotting the landscape and three dramatic caves imbedded in the rocky coastline.

When they arrived at the Corfu Airport, Yanni and Emily learned that their return flight had been delayed. Instead of letting disappointment erase the bliss of a dream vacation, they took the postponement as a blessing that granted one more night in Athens dancing romantically at the St. George Hotel. They climbed up to the highest point in Athens, Lykavittos St. George Church, where the annual Easter pilgrimage is held. The views overlook the amber lights of the city and the Aegean Sea. They gazed up at the heavens and offered thanks to God for an idyllic and memorable celebration of their love.