While fishing on a dock one day, I felt resistance on my line. I leapt into action and proceeded to reel in what I was certain was a whopper of a fish. Sadly, I only caught a whopper of a submerged piling. Here’s some eco friendly tips for your time on the water.

Just another offering to the fishing gods,” I muttered as I snipped my line free. Unfortunately, I am not alone in my offering of fishing gear. More than 600,000 tons of gear is left in our oceans annually, according to World Animal Protection, an organization devoted to reducing discarded gear. It’s called ghost gear, because it continues to fish by entangling and endangering marine life.

The problem of ghost gear is most often associated with commercial fishing practices, but a 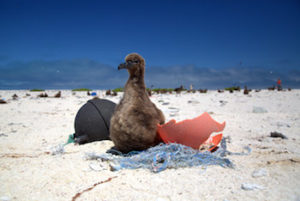 quick glance at debris fields along our shorelines and coastal waterways reveals it is a recreational fishing concern, too. Abandoned plastic lures, lead weights and fishing lines decompose slowly, often leaching toxins in the process.

The fishing industry has made great strides in eco friendly tackle by developing biodegradable lures and lead-free weights, but improperly discarded fishing lines continue to be a major contributor to recreational ghost gear. Most lines are made from synthetic plastics, which persist over time and become an entanglement hazard for marine life. Sea Lions, dolphins, manatees and turtles are regularly found trapped in errant lines, and this can result in loss of fins, flippers, and in many cases, life.

In 1990, the Berkley Conservation Institute, a division of the Berkley fishing tackle company, began a line recycling program. Retailers, tackle shops and marinas provide support by displaying collection bins. Usually made from PVC pipes, these bins are placed near marinas, fishing piers and along waterways. BoatU.S. Foundation has built and distributed more than 2,000 bins.

State and federal agencies, individuals and organizations have also disseminated collection bins around the country. Collected line is sent to Berkley’s recycling center in Iowa, where it is used to make tackle boxes, spools, fish habitats and even toys. Through its program, Berkley has recycled more than 9 million miles of line.

Fishing may not be part of your boating experience, but if you see tangled lines in the water or on the shore, remove it and you might just save a sea creature’s life.

MORE THAN A MANATEE

The Intracoastal Waterway’s southern portions are dotted with signs to protect the manatee population. In 2018, Florida saw 122 manatee deaths due to boat-related injuries. To reduce the likelihood of striking a slow-moving manatee, boaters are asked to reduce their speed and avoid creating a wake. That pesky “No Wake Zone” protects more than manatees.

If your cabin contents have scattered due to an inconsiderate boater, you know the power of even a small wake, especially in narrow waterways. Energy generated by a wake can be enough to deteriorate vital marine habitats such as seagrass beds, oyster beds and salt marshes. Increased turbidity may disrupt nutrient and pH levels, which can damage a primary ecosystem. Areas frequented by boat traffic, tight waterways and shorelines lacking substantial vegetation are at greater risk.

Beyond the wake, boaters should be observant of other marine life. The manatee is not the only potential victim of boat strikes. Sea turtle rescue centers routinely see an increase in turtles with propeller injuries during peak boating seasons. Most turtles can swim at bursts of up to 25 miles per hour, but often they are no match for an oncoming boat. A propeller can cut through turtle shells causing death or paralysis.

Sadly, another common result from a boat impact is a condition with a funny name, but not a funny diagnosis. Bubble Butt Syndrome is caused when a turtle is hit as it is breathing air at the surface. Somehow the hit forces air out of their lungs and into their body cavity. This permanently trapped air keeps the turtle afloat. Unable to dive for food, escape predators or other boats, these turtles, if rescued, spend the rest of their lives at a rehabilitation facility.

Dolphins are also common victims of boat strikes. This may come as a surprise if you’ve been fortunate to witness dolphins following your wake or playing at your bow. These beautiful creatures seem perfectly at ease around our fast-moving boats, but it is not uncommon for collisions to occur. Young dolphins and slow swimmers with limited diving capabilities are at risk of boat strikes, and adult dolphins can’t always adjust to sudden direction or speed changes.

We can contribute to the safety of marine life and their habitats. Slow down in shallow, narrow protected waterways. If you boat in an area where marine animals frequent, designate someone to keep watch and alert you to their presence. Report injured or deceased wildlife. The Coast Guard, VHF channel 16, can direct your report to the correct agency. The National Oceanic and Atmospheric Administration offers a free reporting/information app, Dolphin and Whale 911, which allows you to report injured or stranded animals, get tips on how to help or identify marine mammals, and send photos to a response network. 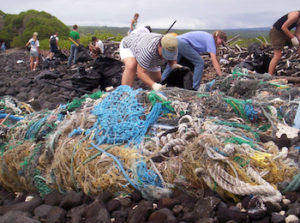 HOME IS WHERE THE ANCHOR DROPS

An eco friendly/environmentally sensitive version of this popular boating phrase would be “THEIR home is where your anchor drops.” Whether you stop for lunch, shelter from a storm or stay overnight, you drop your anchor in a marine life habitat, which can damage vital aspects of the ecosystem. Seagrass beds not only provide shelter for breeding or juvenile marine life, they also play a photosynthetic role in our environment. Like grass on land, they absorb carbon dioxide and release oxygen into the water.

If left undisturbed, seagrass root systems can store large amounts of carbon dioxide for decades. They capture as much carbon per square meter as rainforests, helping to reduce the rate of global warming. Coral reefs do not store carbon, but they do support more species per unit than any other habitat and harbor 25% of all marine species. Some coral species grow only 1 centimeter per year. Recovery from anchor damage can take decades.

One study in the Florida Keys found that 57% of shallow water reef sites had signs of anchor damage. An improperly placed anchor can crush coral, but anchor chains can do even more damage. As boats sway, anchor chains scrape along the coral or seagrass beds, breaking off structures, removing living tissue and uprooting plants.

To be eco friendly and environmentally considerate, choose an anchoring site away from sensitive areas when possible. Avoid dragging your anchor. I know this is everyone’s goal in general, but using appropriate lengths of chain, observing your holding and taking time to reset if needed will limit the contact and disruption your anchoring makes on seafloor plants and animals. Use as much care retrieving your anchor as you did setting it. Drive over your anchor to bring it up vertically. If moorings are available, consider using them. Moorings are usually placed away from shorelines and less likely to let your boat cause damage to the seafloor.

The boating lifestyle affords us the opportunity to witness marine life’s spectacular diversity and beauty. Making just a few adjustments in our boating practices can go a long way in preserving the marine environment we enjoy. As we cast our lines, explore the waterways and take in the beauty of marine life around us, let us be mindful that our playground is their home and have a more eco friendly mindset.