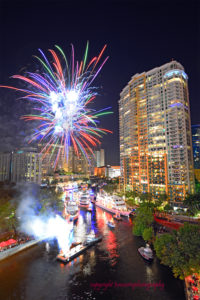 Those who say it does not feel like the holiday season in Florida without snow haven’t experienced the nearly 100 boat parades that occur in December across the Sunshine State.

Thousands of boaters cruise down for the winter when the birds fly south. Many arrive as soon as the official hurricane season is over, and Florida switches from hurricanes to holidays just like that!

Throughout December, the Sunshine State gets even brighter when boaters light up the Intracoastal Waterway, lakes, canals and rivers. To create a winter wonderland on water, cities, towns, marinas and yacht clubs often put a year’s worth of planning into holiday boat parades.

Early in the season, boaters fill out entry forms and start the creative process to show off their vessels in holiday style. Boaters hang festive lights and tie colorful bows onboard to prove that it doesn’t have to be freezing outside to spark the yuletide spirit.

Decorated flotillas run the gamut with dinghies converted into Santa’s sleighs, fishing boats wrapped up like Christmas gifts, megayachts turned into magical dreams and paddleboarders dressed as reindeer. Each parade has its own personality. Some have themes, others have panels of judges and many collect gifts and toys for charities.

Seminole Hard Rock Winterfest Boat Parade in Fort Lauderdale is Florida’s largest parade covering 12 miles for the “Greatest Show on H2O.” Organizers choose a theme, and this year’s motif is “Lights, Camera, Action…Movies on Parade.” The two-and-a-half-hour parade not only includes private boats but also features corporate megayachts and 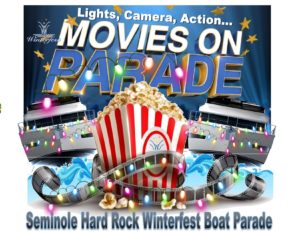 giant showboats. Hundreds of thousands of lights are accompanied by musical groups, beauty queens and celebrities. Considered one of the top 10 parades in the world, this event draws more than one million spectators along the route. It is Florida’s largest live event and the seventh largest spectator event in America.

Marine Industries Association of Palm Beach County sponsors its local holiday boat parade, which brings the community together for an “On the Water” toy drive. Local sponsors and businesses create a day of fun and encourage people to donate toys to children in need. Last year’s event had more than 70 decorated boats, $10,000 in prizes and 11,000+ donated toys, making it the largest event for Toys for Tots in the entire country.

The parades present much more than lights. As the moon glistens on the water and music fills the night air, guests onboard festive boats wave and dance while cruising past spectators. Many prefer to catch the action on dry land, so lining the shores to admire the procession has become a tradition for families and friends of all ages. Bring a thermos of eggnog, put on your ugly Christmas sweater, grab a scarf or wear an antler hat. One thing for sure, the parades bring a lot of smiles to everyone, and that’s probably the best holiday gift of all. 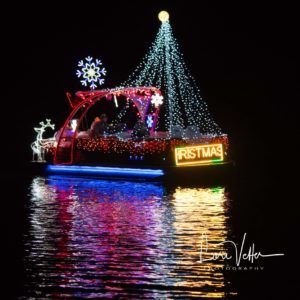 For the past 37 years, Palm Coast Yacht Club organizes one of the area’s largest holiday boat parades. Last year, the Palm Beach Observer called it “a river of lights” as cars honked their horns and hundreds shouted their enthusiasm. For 3.5 miles, boaters are escorted by Flagler County’s Sheriff’s office, Florida Fish & Wildlife Conservation Commission, TowBoatU.S. and the Coastguard Auxiliary.

Key West is known to throw a festive holiday parade. The historic seaport is surrounded by restaurants, bars and resorts that offer great viewing venues. Schooner Wharf Bar/Absolut Vodka lighted boat parade offers a magical nautical display of lights and creativity. The judges’ stand is located at Schooner Wharf with more than $20,000 in prizes.

‘Tis the season to get out and spread holiday joy by cheering on boaters who agree that Santa would prefer to winter in Florida rather than shiver at the North Pole. Add the following parade dates to your schedule and join the winter fun: