THIS OR THAT >
Food

TO CRACK OR TO PEEL? THAT IS THE QUESTION. 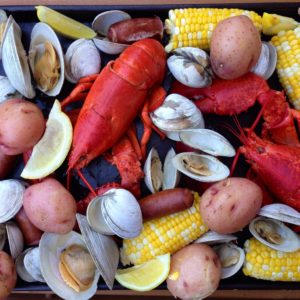 Whether boiled or steamed, you can’t go wrong serving this shellfish. Try a famous lobster roll with claw meat, mayo, celery and parsley in a hot dog-style bun. Or get down and dirty by cracking open the shell and picking out the tender morsels. Drawn butter and lemon are all you need to enhance the flavors of the sea.

The first lobster pound was established in Vinalhaven, ME, in 1876, a town where the lobster biz still thrives. Originally used by Native Americans for fish bait and crop fertilizer, traditional cooking methods covered these crustaceans in seaweed and baked them over hot rocks — a method that inspired today’s New England clambake.

Even though Connecticut is credited as the first place to serve a lobster roll, Maine is the state to visit if you want an authentic bite. Check out Portland for dishes such as lobster mac and cheese and seafood chowder. Bar Harbor is great stop for fresh catch. 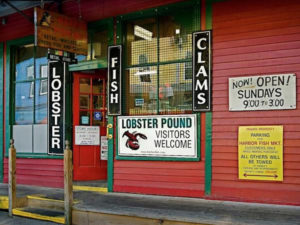 There’s nothing like dining on the water and breathing in the summer air while feasting on fresh seafood. For the best seaside views and daily catches, check out Young’s Lobster Pound in Belfast. Or go south to Kennebunkport’s The Clam Shack for a boiled lobster dish.

One cup of lobster contains 27 grams of protein and is among the healthiest proteins to incorporate in your diet. It contains a rich source of copper, omega-3 fatty acids, magnesium, zinc and vitamin B12. Best of all, it’s absolutely carb-free! 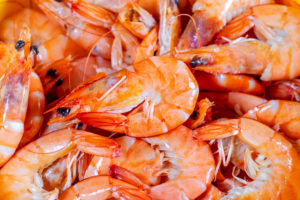 South Carolina is native to three species of shrimp: brown, white and pink, all of which bear the same delightful taste but come in different sizes. The first shrimp industry studies in America were conducted in the 1950s on Wadmalaw Island, SC. Now a multimillion-dollar market, shrimp aquaculture continues to thrive.

With two shrimping seasons in the South, a fresh catch is always plentiful. The smaller brown shrimp are harvested from May to August and white shrimp from September to December. Beaufort and Charleston are shrimping hubs.

Nobody serves up shrimp better than the South. For creamy comfort food, check out the Acme Lowcountry Kitchen in Charleston for the best shrimp and grits. For a scenic, waterfront view to accompany your aquatic fare, visit Poseidon Coastal Cuisine & Rooftop Bar in Hilton Head.

Wild-caught shrimp are rich in nutrients, low in calories and provide vitamins and natural cleansers like niacin and iodine, which are beneficial for thyroid function and brain health. All the antioxidants are sure to rejuvenate you.