How Monterey Became the Sardine Capital of the World

“Cannery Row is the gathered and scattered, tin and iron and rust and splintered wood, chipped pavement and weedy lots and junk heaps, sardine canneries of corrugated iron, honky tonks, restaurants and whore houses, and little-crowded groceries, and laboratories and flophouses.” 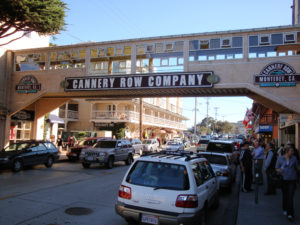 The Cannery Row of Steinbeck’s 1945 novel has long since morphed into a seaside tourist destination with only a sliver of his description remaining. What’s left is enough to imagine the smells and sounds of Monterey’s working waterfront in its heyday as the “Sardine Capital of the World.”

Chinese fishermen discovered the bounties of Monterey Bay in the 1850s when they crossed the Pacific Ocean in junks. Back then, the ocean harvest was squid and abalone, and as the 19th century drew to a close, valuable salmon catches replaced them. The upwelling of nutrient-rich water along this section of the central California coast created one of the most productive fisheries in the world.

As the 20th century began, two events coincided in Monterey to start a fishing boom. Sicilian immigrants, experienced in commercial fishing in the Mediterranean, brought the lampara fishing net to Monterey Bay. This style of hand net allowed fishermen in small inshore boats to increase their catch of sardines dramatically. In 1902, the Booth Cannery opened in Monterey harbor to preserve, pack and ship local fish to a wider market. The Silver Harvest of sardines was born.

The advent of World War I increased worldwide demand for canned sardines, and seven new canneries were built along the Monterey waterfront. The sardine canning process was labor intensive and malodorous. A contemporary researcher wrote:

“The cannery pack at Monterey is almost all in one-pound oval cans and is shipped in cases of 48 cans each. … In all canneries, the fish are cut [cleaned], washed, brined, and dried. … In most Monterey plants the next step is frying [really boiling] in oil before packing in the can. … After sealing, all cans are given a thorough second cooking or ‘retorting’ for several hours under steam pressure and at high temperature.”

In 1928 larger purse seine boats, which trailed nets a quarter mile long and down to a depth of 200 feet, replaced the inshore fishing boats using hand nets. The stage was set for massive catches.

During the Great Depression, demand for edible sardines slackened, and to save jobs these sardines were processed into fish meal. Every year, 700 million sardines were turned into fertilizer. In the 1940s, the world was at war again, and canned Monterey sardines fed both Allied armies and nations, while the canneries continued to expand.

In all canneries, the fish are cut [cleaned], washed, brined, and dried. In most Monterey plants the next step is frying [really boiling] in oil before packing in the can.

At its height, Cannery Row processed 250,000 tons of sardines a year. During the 1950s, overfishing, competition from other species and changes in oceanic conditions caused the sardine fishery to fail dramatically. In a five-year period, the catch fell by more than 90 percent. Ed Ricketts, the well-known Monterey marine biologist investigating where all the sardines had gone, finally surmised, “They’re in cans.” Most of the canneries closed and hard times hit, as Cannery Row became a ghost town.

ACTIVITIES YOU WON’T WANT TO MISS IN MONTEREY

Exhibits display the wonders of the region’s marine habitats, including sea otters and a living kelp forest.

Step back in time to discover the history of local waterfront fisheries. 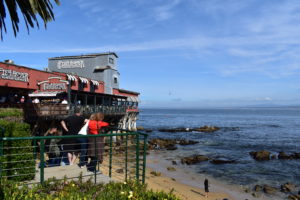 Come on board to search for humpbacks, dolphins, sea lions and more local aquatic creatures.

The Monterey Bay Aquarium at the former site of the Hovden Cannery now anchors a rejuvenated Cannery Row. Given the history of the sardine industry, the aquarium focuses on ocean conservation, saving species and sustainability. Monterey has two marinas for transient boaters:

Vessels up to 200 feet can be accommodated at Breakwater Cove, while the city dock has a 75-feet LOA limit. Both marinas are outfitted with floating docks for ease of docking in the average 6-foot daily range of tides. Hotels, restaurants, souvenir shops, art galleries and boutiques fill the former fish cannery buildings, completing the village-by-the-sea atmosphere. It makes for a very enjoyable weekend destination for boaters. And do take the time to curl up with a copy of Steinbeck’s novel to capture Monterey’s true flavor.

Capt. Jeff Werner has been in the yachting industry for over 25 years. In addition to working as a captain on private and charter yachts, both sail and power, he is a certified instructor for the USCG, US Sailing, RYA and the MCA. He is also the Diesel Doctor, helping to keep your yacht’s fuel in optimal condition for peak performance. For more information, call 239-246-6810, or visit MyDieselDoctor.com. All Marinalife members receive a 10% discount on purchases of equipment, products and supplies from Diesel Doctor.