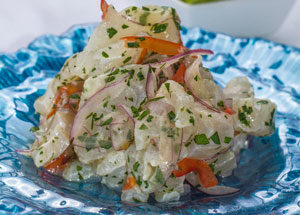 You would think that the last thing I’d want to do on my day off was jump on a boat. For the past 14 years I’ve lived onboard various yachts, but my days are busy inside the boat cooking for guests and crew, so when we arrived in Costa Rica the first thing I did was look for a guide with a boat to show me all I’d missed.

We hadn’t motored more than 100 feet from the black volcanic sand of the beach into the bay when Herardo pointed over the water.

He swung the bow of the boat toward the mouth of the bay. Two islands covered in a vibrant green canopy of trees blocked the waves of the Pacific and the view of endless blue, but I doubted the serene beauty was what had the man excited.

Suddenly, the water exploded and the ridged mouth of a humpback whale shot into the air. To the right, the water opened again and a smaller, less wrinkled identical mouth broke the surface.

I swiveled on the wood bench, clutching the rail and stared in awe.

The massive body seemed to hover half out of the water like it was suspended by invisible marionette strings before arching backwards and splashing into the calm water. White water rocketed up and sprayed the calf as he too sunk back into the bay.

“And you thought they were myths.” My husband’s eyes twinkled the same color as the water around us. His smile created as many ridges around his eyes as those on the underside of the whale.

“I’ve never seen a whale.” I told Herardo, knowing he couldn’t understand me but hoping he sensed the excitement in my voice.

Patrick laughed. “We used to see them every morning in Tahiti. They were everywhere.”

“Yes, but you never came and got me.”

“You were busy making breakfast.”

“For you!” My voice squealed. “I was making breakfast for you!”

Herardo laughed. He may not understand what we were saying, but the exasperated banter of husband and
wife was universal. He pointed again.

One of the mama whale’s pectoral fins sliced out of the water and rolled through the air.

Herardo slowed the boat and leaned against the center console to watch the show he’d probably seen a thousand times.

As if sensing they had to make up for my years of missed sightings, the humpback and her calf breached, jumped and frolicked in the water for the next 20 minutes while the roasting sun rose higher, and I swore I’d leave the galley more if this was what I’d see.

Patrick fidgeted in the seat beside me, eager to get to the surf spot of our destination. He’d seen plenty of whales. His life on the outside of the boat was much different from mine inside.

“Vámonos!” Herardo swung the panga away from the aquatic Cirque du Soleil and headed for open water.

We sailed past Red Rock Cliffs and Seaside Caves. It wasn’t long before the next show started. A school of  spotted Pacific dolphin leapt across the bow and raced in our wake. Their white spots flashed in the sunlight as we sped to the wave.

Patrick tossed his board into the water, vaulted over the side and paddled toward shore before Herardo had the anchor down, leaving just the guide and me to divvy up lunch.

Herardo lifted the front hatch of the boat. The rusty hinges squeaked. He pulled a foil-wrapped dish from the ice and held it out to me.

I removed the cover and peered inside. The black beans of the gallo pinto had turned the rice a grey color. Flakes of red pepper peeked out from between the grains I’d seen with every meal since we’d arrived in Costa Rica.

“Tu cocina?” I pointed at Herardo hoping I had the right tense but doubted it.

He shook his head and held out another dish. “Mi esposa.”

With my broken Spanish and his little English I pieced together the menu his wife had cooked us.

I opened the next dish to the sight of ceviche. “Tu pesca?”

His wide toothy smile needed no translation. I knew he’d caught the fish himself.

The tang of limejuice lit up my mouth and punched through the soft delicate fish. The heat of the chilies burned my senses and awakened my hunger. This was spicier than the other versions I’d tasted along the coast.

Turning back to the hatch, he pulled out a coconut and machete. He swung the blade at the coconut, peeling the husk away, then tossed the coconut in the air, caught it and swung again. Hack, toss, twist, hack, toss, twist. He continued until the top of the coconut showed the white meat inside.

I checked to see he still had all his fingers and smiled.

He took the tip of the machete and pierced a hole in the meat of the coconut and handed it to me.

I brought the coconut to my lips and drank. The cool water inside beat back the roasting sun and quenched my thirst.

“Muy rica” I used the Costa Rican term to express how delicious it all was, but Herardo wasn’t listening. Instead he pointed at two sea turtles bobbing in the swell. I hung an arm over the side and trailed my fingers through the warm water. Maybe I’d never return to the galley.