Are you a Looper?
Florida
Cruising Stories

America’s Waterways – A Year of Experiences Along the Great Loop: Part 2

Chased out of the Florida Panhandle by November’s slowly declining temperatures, we sought refuge in the warmer, sun-drenched latitudes of Florida. We all know the shortest distance between two places is a straight line. The Great Loop’s straight line across the Gulf of Mexico from Carrabelle to Tarpon Springs is a distance of 170 miles and deposits you alongside the best Greek restaurants west of Athens. Located on the Anclote River, the Tarpon Springs City Marina is in the thick of the action along the town’s main thoroughfare and indulges your senses with tantalizing aromas. Spiritus twisted her way off the main river to nearby Turtle Cove Marina, which provided a somewhat quieter respite from the flocks of tourists strolling the city’s sponge docks.

A scant 10 miles south lies the city of Dunedin, a quaint little berg which left us smitten and refused to free us until the end of December. The small, intimate Dunedin City Marina placed us a stone’s throw from downtown while to the north, the larger Marker 1 Marina seemed to be the Looper favorite. Dunedin residents love to flaunt their Scottish heritage. Kilt-fitted bagpipe bands (several of them!) proudly marched through the streets during the annual Christmas parade. Joining the throngs of culinary aficionados after the parade, we found everything from barbecue to Irish stew, haggis to quesadillas and stone crab to amberjack.  The same can be said for the neighboring city of Clearwater Beach, sans kilts and bagpipes. Here, the main attractions are the marvelous white sand beaches and the seemingly endless number of fresh seafood restaurants, all conveniently located near the Clearwater Beach Marina.

All the fine dining forced us to get some much-needed exercise, making the Fred Marquis Pinellas Trail an invaluable weight-control asset. The 38-mile rail-trail stretches from Tarpon Springs in the north to St. Petersburg in the south. Utilized exclusively for cycling, walking or jogging, the trail passes through the towns of Palm Harbor, Dunedin, Clearwater, Largo, Seminole, South Pasadena and Gulfport. For many Loopers, this trail is reason enough to justify cruising with bicycles.

Glancing at a Rand McNally you’d think that much of Florida’s west coast is just one big megalopolis. But the Gulf Intracoastal Waterway between Tarpon Springs and Fort Myers Beach has countless scenic anchorages to provide peace and solitude. Well-known waterfront cities like St. Petersburg, Sarasota and Venice hum with activity. 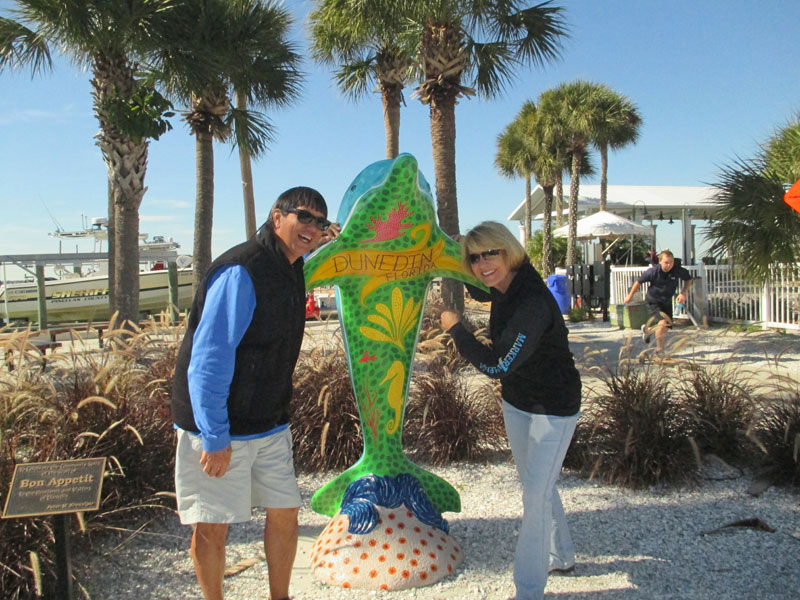 As someone once said, “If you’re bored here, then you’re just a boring person!”  The area surrounding Charlotte Harbor, which is actually a huge bay, has many fascinating places to visit. Englewood, Boca Grande, Burnt Store, Pine Island and Punta Gorda are just a few. But the spot we kept returning to (three times!) during our Great Loop experience was the anchorage at Pelican Bay, adjacent to the island of Cayo Costa. The island is a Florida State Park, accessible only by boat, ferry or helicopter. This peaceful — well-protected anchorage allowed us to see dolphin, manatee, alligators, bald eagles, owls, woodpeckers and pelicans; lots of pelicans! Several days we packed a picnic, rowed our dinghy to shore and walked across the island to the Gulf of Mexico. Even in January we enjoyed relaxing swims, long strolls along the beach and hikes on the wooded trails. Before returning to Spiritus, we always stopped by the park ranger station to grab a Klondike bar out of the freezer. They have all the flavors!

When approaching Fort Myers Beach, a vacation destination in its own right, a decision has to be made. Some folks decide to leave the protection of the GICW and continue south to spend the rest of winter in the Florida Keys.

We decided to head east on the Caloosahatchee River and stop for a while at the City of Palms: Fort Myers. Enjoying their tepid weather throughout the rest of January, we explored south Florida by car. Day-trips to Naples, Marco Island, the Everglades and Sanibel Island created many fond memories.

In February we continued our east-bound cruise up the Caloosahatchee River, eventually reaching the western shore of the seventh-largest freshwater lake in the country; Lake Okeechobee. High winds have a dramatic effect on the lake’s 9-foot average depth, so it was imperative to listen to NOAA reports before leaving the protection of the river’s lock system. However, we easily crossed the lake in just one day. The St. Lucie Canal on the east side of the lake completes the waterway joining Florida’s two coasts, essentially linking Fort Myers Beach in the west to the city of Stuart in the east.

Nature’s barrier islands provide a continuous, well-protected avenue along the Atlantic Intracoastal Waterway for cruising Florida’s eastern seaboard. As we departed Stuart at the end of February, we realized that you cannot travel more than a day without going through a town with “beach” in its name; Jensen Beach, Vero Beach, Melbourne Beach, Cocoa Beach, New Smyrna Beach, Daytona Beach, Flagler Beach, Fernandina Beach. Despite the similarity in their names, each town is unique in its history or its culture and are all worthy of a visit.

A stop at Vero Beach City Marina made us linger to explore the local area from the water’s edge. Don’t pass up the chance to delve into the history of the space program near Cocoa Beach. The ever-popular Cocoa Village Marina was a convenient location for us to enjoy the museums and tours in and around the Kennedy Space Center and Cape Canaveral. Race fans know that Daytona Beach is home to the Daytona 500, held in February each year. How cool would it be to stay aboard your boat during race weekend? Or during Bike Week in March, like we did? If I had a nickel for every Harley that rumbled past our slip at the city marina, I could afford a new chart plotter!

And if history is your passion, then plan to stop in St. Augustine, the oldest city in the U.S. The AICW provided a great view of the historic St. Augustine Lighthouse just before we reached the St. Augustine Municipal Marina. Even this Floridian learned some state history at the nearby Lightner Museum, housed within downtown’s historic Hotel Alcazar.

With so much to see and do, cruisers can easily maintain a pace that prevents wandering north of Jacksonville before April. That’s what helped me keep comfortable in shorts!